We sincerely welcome friends from domestic and abroad to visit and work together to create brilliant !
You are here: Home » Blogs » KNOWLEDGE » What is suction control valve?

What is suction control valve?

It controls the amount of oil entering the rail to meet the pressure setting requirements of the common rail system, and forms a closed-loop control of rail pressure together with the rail pressure sensor. It is a mechatronics component. Problems with circuits or mechanical components will cause it to work abnormally. Due to the current fuel quality problems in China, it is more common to cause the SCV valve to be stuck and blocked, which directly causes abnormal diesel engines. jobs. To understand the working principle of the suction control valve(SCV), let's take a look at the following points.

What is common rail

The low-pressure rail is where the diesel is discharged from the high-pressure fuel pump and merged with the excess diesel from the injector, and then returns to the fuel tank.

However, all of the fuel flow in the diesel oil circuit is detected by the sensor, the pressure signal is converted into an electric signal and then input into the computer version, and the computer version performs logical calculation and re-outputs to control the actuator to complete the above action. 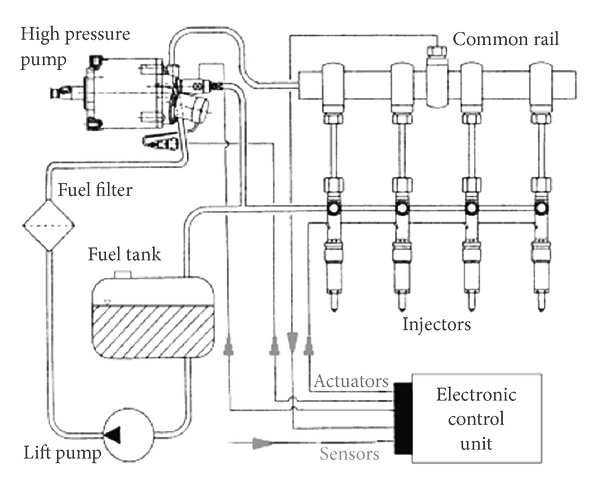 What is a suction control valve

The suction control valve (fuel metering valve) is abbreviated as  IMV, EFC/MEUN, SCV, PCV, etc. It is a mechatronic solenoid valve component, generally installed on the high-pressure fuel pump, controlled by the engine ECU, and controlled by the rail pressure sensor. The measured value is closed-loop control; the plug has two wires which are the power supply voltage and the signal voltage. The engine control computer is controlled by PCM, so the suction control valve is actually a rail pressure regulator. It is a frequency conversion and duty cycle signal. By using a multimeter to measure its resistance, voltage, rating, and duty cycle signals, it can be obtained at the same time Its signal cycle, pulse width, trigger current and other information can make a comprehensive evaluation of its performance characteristics and the operation of the entire fuel system.

The engine control computer PCM controls it by PWM control, also called duty cycle control, which changes the area of the internal oil passage through the size of the current pulse to control the fuel flow. Solenoid valves generally operate at a frequency between 100hz and 200hz. If the frequency is too low, the oil will enter in the form of pulsation, which will cause unevenness. The evaluation rate is too high, and the spring starts to close before being sucked up, so the solenoid valve does not work.