We sincerely welcome friends from domestic and abroad to visit and work together to create brilliant !
You are here: Home » Blogs » KNOWLEDGE » Differences between Diesel Engines and Petrol Engines

Petrol engines and diesel engines are most commomly used internal combustion engines. The premier difference between them is the way they do their combustion.

In petrol engines, the combustion is achieved by igniting the air and fule mixture whereas in the diesel engine, the atomized form of the fuel is made to contact with high temperature and high-pressure air. Hence, their efficiency and the pollutant they produce are also different.

The reality is that any fuel takes a certain amount of time to burn. Even if the fuel can be brun out instantly in a petrol engine, an instant rise of the pressure in the cylinder will blow up the engine, so it is not a bad thing to allow the combustion process to take a little time.

Both the ideal Otto cycle and the ideal diesel cycle assume adiabatic compression and expansion, however, there must be heat loss in practice, especially when the gas expands, so the actual efficiency will be lower.

The flame propagation of the petrol engine

The diffusion buring in the diesel engine

In the diesel engine, the air and fuel are seperated before burning. Actually, the diesel engine compress the air to a much higher degree, as the air gets more and more, it also heats up. When the air gets hot enough to ignite the diesel fuel, the diesel will be sprayed in to the compressed air bu the suction control valve which usually installed at one side of the cylinder. No electronic ignition system is required in the whole process,

At the start of the spraying, the new fuel sprayed into the combustion chamber not burning completely will be reduced down to particles of carbon soot. And at the end of burning, there's no enough oxygen, hence NO will be generated.

The diffusion burning is very stable, however, not very useful. 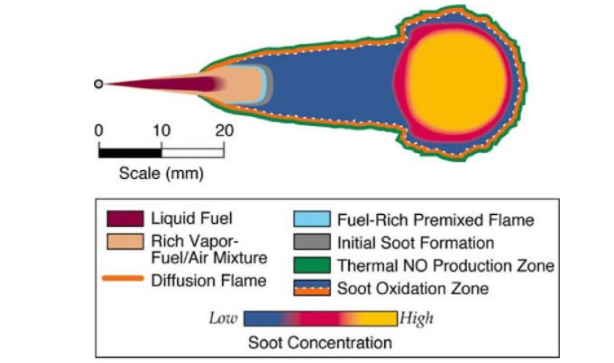 Different pollutants produced by the petrol engine and the diesel engine

The main pollutant emissions from vehicles are UHC, CO, soot, and NOx.

Petrol engines produce some UHC, CO and NOx, so they all have three-way catalytic converters, which convert the exhaust gases almost completely into harmless CO2 and water as long as the combustible mixture is of equivalent ratio.

Diesel engines produce considerable soot, most of which are eventually oxidised to CO2 and water. However, a small part of soot is left to be the particulate emission. Beisides, a lot of NOx is produced due to the pretty high temperature, so dealing with the pollutants emitted by the diesel engine can cost much.