We sincerely welcome friends from domestic and abroad to visit and work together to create brilliant !
You are here: Home » Blogs » KNOWLEDGE » Common Rail Pressure Control Valve

Why are diesel cars so popular?

According to incomplete statistics, 60% of European cars are diesel vehicles, and more than 80% of SUVs also choose diesel engines. The reason why diesel models have such a high status in developed regions such as Europe is inseparable from the advantages of diesel engines. Due to structural problems, fuel engines do not have spark plugs. When diesel engines work, the air is sucked into the cylinder. When the air in the cylinder is compressed to the end, the temperature can reach 500-700°C, and the pressure can reach 40-50 atmospheres. When the piston is close to the top dead center, the fuel injection nozzle of the fuel supply system injects fuel into the combustion chamber of the cylinder at very high pressure in a very short time. The diesel forms fine oil particles, which are mixed with high pressure and high-temperature air, and the combustible mixture burns by itself. , The violent expansion produces explosive force, pushing the piston down to do work, which can make the energy conversion rate reach about 45%-50%, while the gasoline engine is only 30%, which means that the torque of the diesel car is compared with the displacement of gasoline and diesel engines. Bigger. Especially the torque in the low-speed range is manifested in that the climbing ability of diesel vehicles is stronger than that of gasoline vehicles. There are many mountain roads and ramps in Europe. Diesel cars drive better than gasoline cars and have more power. And now with the development of sound insulation and noise reduction technology, the shortcomings of diesel engine noise are becoming less and less obvious.

Since the 1990s, the European Union has adjusted vehicle exhaust emission standards several times. As early as a few years ago, Europe has realized that the sulfur content of diesel vehicles is less than about 10 ppm. The problem of high sulfur content is solved, and the environmental performance of diesel vehicles is more prominent. Compared with gasoline vehicles of the same displacement, the emissions of CO2, CO, and other greenhouse gases in the exhaust of diesel vehicles are at least 45% lower. Later, with the improvement of technology, the CO2 emission can be reduced by about 25%, and the NOx and particles through exhaust gas recirculation and exhaust gas after-treatment are more than 98% lower than the old model. Diesel vehicles have many advantages such as strong power, environmental protection, and fuel economy.

Diesel engines work by injecting high-pressure diesel fuel into the air that has been compressed to a very high temperature to quickly mix and ignite. The mixture of oil and gas is not as uniform as that of a gasoline engine. There is always some fuel that cannot be completely burned and decomposed into carbon-based particles (ie, PM, black smoke). At the same time, due to the uneven mixture, the local temperature is very high during the combustion process, and the diesel engine burns with excessive air, resulting in a large number of nitrogen oxides (NOx). Compared with gasoline engines, diesel engines have a larger excess air coefficient, so carbon monoxide (CO) and hydrocarbons (HC) are much lower than gasoline engines. Therefore, the focus of controlling diesel engine emissions is to reduce nitrogen oxide (NOx) and particulate (PM) emissions. Emission control measures, therefore, have two methods to improve the combustion efficiency in the engine and to improve the performance of the filter that removes harmful substances in the exhaust gas.

Exhaust gas turbocharging is the main method to increase the diesel engine power and improve its emissions. After using exhaust gas turbocharging, the excess air coefficient is large, the fuel atomization quality is improved, and the fuel deposited on the wall of the combustion chamber is reduced so that the hydrocarbons HC and carbon monoxide CO are greatly reduced, and the most important thing is to reduce the particulate emissions from incomplete combustion. . However, due to the increase in the temperature of excessive air combustion, the emission of nitrogen oxides and NOx will increase. At this time, the intercooler can lower the intake air temperature and appropriately suppress the combustion temperature.

In a diesel electronically controlled high-pressure common rail injection system, the common rail pressure control valve plays a very important role. As the first "checkpoint" of the high-pressure oil circuit, it is also a common wearing part in addition to the fuel injector when the engine is in use. 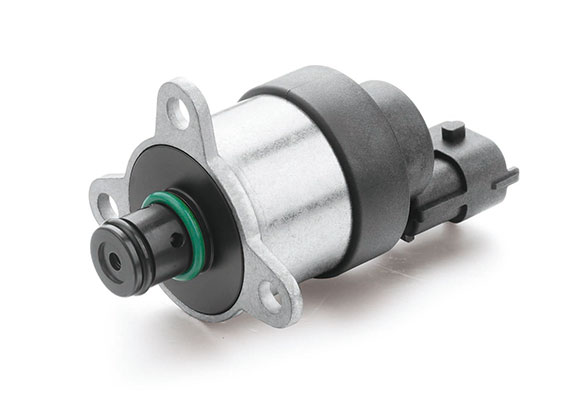 The common rail pressure control valve，which is installed on the fuel intake side of the high-pressure fuel pump. Generally speaking, it is a special solenoid valve. The special feature is that its opening can be controlled by the engine computer in any stroke position to adjust the volume of fuel entering the plunger cavity of the high-pressure oil pump.

Too large or too small can not make the system stable. If the volume of fuel entering from the fuel pump is greater than the fuel ejected from the injector, the pressure in the common rail pipe will continue to rise, eventually causing the pressure relief valve to open. The injection pressure in the pipe continues to drop and the fuel cannot be completely atomized.

The structure of the common rail pressure control valve is not complicated. It usually consists of three parts: a housing with a solenoid coil, a valve core and a plunger. When the engine is running, the ECU calculates the fuel injection volume of the fuel injector at that time and then combines the current rail pressure and the target rail pressure to obtain the fuel volume that should enter the fuel pump to be pressurized.

According to the different internal structures, the common rail pressure control valve is divided into the normally open type and the maximum opening in the non-energized free state, and the normally closed type fully closed without the electricity. Commercial vehicles are usually equipped with a normally open common rail pressure control valve. When there is no current passing through, the valve core is normally open at the position of the maximum fuel supply under the action of a spring.

When the control current passes through the solenoid coil of the common rail pressure control valve, a magnetic force is generated and the valve core is pushed down to a certain position. The adjacent plunger adjusts the oil volume by adjusting the opening size of the channel.

Henshine is a manufacturer that manufactures and sells diesel engine parts and is committed to providing customers with high-quality fuel injection system parts. The company has passed ISO9001 quality system certification, and its products meet quality standards and have price advantages. They are sold all over the world and have been widely recognized and affirmed by the market. The company adopts good prerequisite programs and reasonable production technology, sound production quality management mechanism, and testing equipment, and specializes in the production of diesel common rail parts.