We sincerely welcome friends from domestic and abroad to visit and work together to create brilliant !
You are here: Home » Blogs » KNOWLEDGE » When suction control valve needs to be replaced？

When suction control valve needs to be replaced？

The suction control valve is responsible for controlling the fuel pressure of the common rail engine. It allows only the required amount of fuel to be pumped through the system.SCV is an easily worn item.

In this issue, not so much is a fault code always present, the symptoms of stalling, runs rough, surges or does not start and/or does start and then stalls again are evident which points the technician to the suction control valve(SCV) .

If you rarely replace the fuel filter, the dust has a great chance to pass. The piston in the SCV adjusts the fuel flow through activities. Once the dust and dirt penetrate into the SCV, the movement of the piston will scratch and restrict its smooth movement. Even if you change the fuel filter, etc., you may feel frustrated.

Air is also a major cause of SCV failure

Air can easily enter the fuel system in many different areas. The scanning tool will not tell you that there is air in the fuel in the system. The air does not move through the solenoid with each small incremental change in the throttle. The suction control valve uses very fine tolerances in its moving parts. These suction control valves are quickly affected by dust and/or contaminated fuel.

When the intake control valve is contaminated or worn, they will cause the common rail pump to deliver inconsistent fuel pressure to the pressure required by the factory ECU. When the fuel pressure at the fuel injector jumps by several thousand PSI, as the ECU tries (but fails) to find the correct working fuel pressure, the vehicle driver will experience surge. 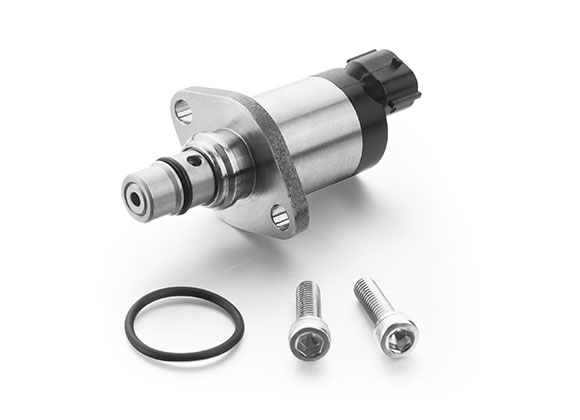 When viewing through real-time data, if the pressure change problem exceeds the preset limit that the manufacturing state should be a normal range of a certain RPM, the vehicle will enter the limp mode. You can reset the normal operating state by stopping and restarting the engine. However, this problem will reappear in a short time. In the state of stopping the up and down pulsation, it was found that the mechanism was closed and the RPM needle was closed. Or when the number is inactive, it can be determined between 10RPM playback speed, but if it jumps between 20-50, you should check SCV for replacement.

Installing diesel performance modules (chips) will always exacerbate this problem. Many people mistakenly attribute this to the chip, because the problem may lie in the absence of a chip. At this time, most people will go to the dealer for repairs, and if they are not covered by the warranty, they will get a large fee to replace the suction control valve.

The fuel metering unit is located next to the engine and can be seen in the engine compartment. Just remove the two hex screws to remove the SCV. It has a rubber gasket that may be a little tight. Generally, replacing SCV can solve most problems.

The longer the SCV, the better its fluidity, and the accumulation of dirt will not be so fast. The high-spec suction control valve enables the common rail pump to provide more fuel for ECU control, and can provide more power on the standard unit.This is the reason why many SCVs are very long.

When installing SCV, pay attention to the installation environment. SCV is easy to install but keep everything clean. Do not install in a windy environment because the air will be full of dust.